‘H2 MEET 2022’, the largest-ever global hydrogen exhibition, is being held at KINTEX from the 31st… 241 companies and institutions from 16 countries around the world participating! 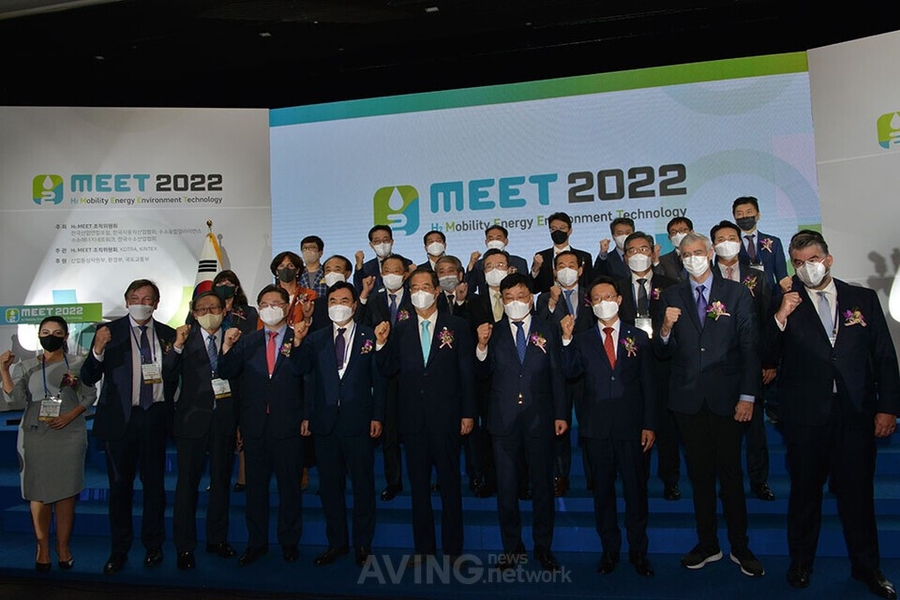 – Build a solid hydrogen economy ecosystem throughout the entire cycle of production, distribution and utilization
– Diversify production methods, such as making hydrogen from electricity produced by nuclear power plants

241 companies and institutions from 16 countries in the hydrogen production, storage, transportation, and utilization field attended the H2MEET, which celebrated its third anniversary this year.

In his congratulatory speech, Prime Minister Deok-soo Han said, “The government will develop the hydrogen industry a step further and grow it into a super-gap industry that leads the global market,” adding, “To achieve this, we will build a solid hydrogen economy ecosystem that covers the entire cycle of hydrogen production, distribution and utilization.”

In his opening remarks, Man-ki Jeong, Chairman of the H2 MEET Organizing Committee, said, “The number of participating companies in the H2 MEET 2022 increased by 56% and the exhibition area was expanded by 42% compared to the previous year, with 241 companies and institutions from 16 countries including the UK, Netherlands, Canada and Australia participating. It has become the largest global exhibition,” and revealed, “This growth is thanks to each country’s expectations for hydrogen and the hydrogen economy.”

First, the H2 Innovation Awards for large companies, SMEs, and startups in the global hydrogen industry, was held with three categories, △Hydrogen production, △Hydrogen storage and transportation, and △Hydrogen utilization. 18 companies competed, and on August 31st (Wednesday) at 4 pm, the finalist companies including 1 grand prize, 3 top prizes (1 company by category), and 6 excellent prizes (2 companies by category) were selected for awards and published, a total of 10 companies.

In addition, the organizing committee newly established the ‘Best H2 Products Media Award’ this year. The award, in which journalists directly participate and select excellent companies in consideration of audience response, market potential, and technological innovation, will select and announce three award-winning companies after the event, and will guide journalists visiting the exhibition hall with mobile voting.

Furthermore, the Organizing Committee is holding a number of convention programs during the exhibition period, such as the ‘H2 MEET International Hydrogen Conference’, ‘Clean Hydrogen Trade Initiative (CHTI) International Forum’, ‘Tech Session’, ‘Online Seminar’, ‘Hydrogen Energy Design (EDC) Conference’, etc. to share technology, global trends, and policy trends, and in particular, it will be held on an international scale with 146 theme speakers and panelists, including 72 foreigners.

The ‘H2 MEET International Hydrogen Conference’, which sold out all seats early last year, is being promoted as a place to share the status, vision, and strategy of the hydrogen industry domestically and abroad. It will be held at Conference Hall A in Hall 9 from 10 am to 4 pm on Friday, September 2, and the panel discussion will feature keynote speakers such as Alannah MacTiernan, Minister of Hydrogen Industry of Western Australia, and Fabrice Espinosa, President of Airbus Korea, Dong-wook Kim, Vice President of Hyundai Motor, Hyung-gyun Kwon, Vice President of SK Group, and Joo-ik Cho, Executive Vice President of POSCO Group.

Also, the ‘Hydrogen Energy Design (EDC) Conference’ will take place from 1:00 pm to 4:00 pm on Wednesday, August 31 and 10:00 to 12:00 on Saturday, September 3 (Wednesday), to discuss alternatives for the construction of a hydrogen industry complex and for the cooperation and trade expansion between Korea and Australia in the hydrogen industry, the ‘Clean Hydrogen Trade Initiative (CHTI) International Forum’ will take place from 10 am to 4 pm on September 1 (Thursday), to share the current status and plans for hydrogen trade between countries and the national clean hydrogen certification system, the ‘Tech Session’ will take place on August 31 (Wednesday) and September 3 (Sat) in the morning and afternoon at Seminar Hall B in Hall 9, to share the latest technologies and visions of global companies and to promote cooperation between companies.

In addition, the ‘Global Business Export Consultation’ hosted by KOTRA and the Organizing Committee will be held at the exhibition hall throughout the event period, and a number of MOUs with domestic and foreign companies and institutions will be held.

Meanwhile, The H2MEET is open from 10 am to 5 pm on weekdays and until 3 pm on Saturdays. Admission is 10,000 won for the general public, 5,000 won for college students, military, elderly, disabled and veterans, and free for high school students and younger. During the same period, the secondary battery materials, parts and equipment exhibition (K-BATTERY SHOW 2022) will be held at Kintex Exhibition Hall 2 along with the H2MEET.

In addition, the organizing committee and KINTEX will enforce preemptive measures against COVID-19, such as wearing a mask, recommending the use of hand sanitizer, establishing a one-way circulation route, and managing the participant density of the exhibition halls.